Trying to maintain some sense of normalcy in the middle of nothing normal means that I'm attempting blogging again.  I like the idea of having a space to put my thoughts out where not everyone I know is seeing them.  I like having a designated space to process my thoughts.

Today was a good day because I did not have any panic attacks.  I felt more in control of things that I have since this whole thing started.  Part of that was because we went over to my parent's house and spent some time outside with my dad.  Part of that was seeing my mom in person, although from the designated six feet away while she stood in the doorway and the kids and I stood outside.  You don't realize how much you miss what was once such an everyday thing.

On one hand, there's the push to be productive.  To clean the whole house, to do all fo the things that I've been putting off since we moved (yes, there are still boxes that are unpacked over a year later). But on the other hand, I have to remember to give myself (and others) grace during this time.

It's funny to me that this entire process feels a lot like grieving.  Grieving for what once was and what feels like it might never be again.  I'm anxious for this all to be over, but terrified of what is to come.  I don't know that I want to focus on what's outside this time and this house because it is so unpredictable.  I used to feel that a certain amount of my life was in my control.  If I behaved well enough or prayed hard enough then I would be able to make sense of it.  Then my brother died and everything changed.  I realized that I no longer had any control over anything and I never did.  And that is what is terrifying about all of this. The thought that the normal we knew - that we could drive to the grocery store and buy milk and eggs; that I would wake up on a workday and go to work - is gone and never was all that normal.

So what does all of this mean?  It means that I have to accept that I can't control things.  I have to accept the mindset that I was reading about the other day of both, and.  The idea that things don't have to be either/or but they can be both, and.  Both terrifying and grounding.  Both overwhelming and peaceful.  Both happening so fast and happening so slowly.  Not either/or but both, and.  Not either I have control or things are awful.  But that things can be both out of my control and okay.  That the things I thought I knew as normal have to change.  That I have to allow myself to be all of myself right now - vulnerable, anxious, terrified, overwhelmed, loving, frustrated, caring - both, and.  And realize that God is always there in that and, even if it doesn't always feel like it.
Posted by Gretchen at 9:34 PM No comments:

Email ThisBlogThis!Share to TwitterShare to FacebookShare to Pinterest
Labels: fall

I think I'm going to try to come up with a mantra for each week, which should help keep me focused and motivated.  Since this week is the first week of school my mantra for this week is:


CARPE THE HELL OUT OF THIS DIEM
Posted by Gretchen at 8:00 AM No comments:

This has been a good summer.  I feel like I've accomplished a lot while also taking the time to relax and rest so that I'm ready (though I never feel ready) for a new school year.  This summer I:


It's been a good summer.  This week I'm starting back to school so my goal is simply to get through the week with a positive attitude.
Posted by Gretchen at 9:07 PM No comments:

The Fault in Our Stars

I just finished reading The Fault in Our Stars by John Green.  Oh my gosh.  This is seriously the best book I've read in a long, long, long time.  It's so good that I'm not even sure what to say about it except that you should go read it.  Right now.  Seriously. 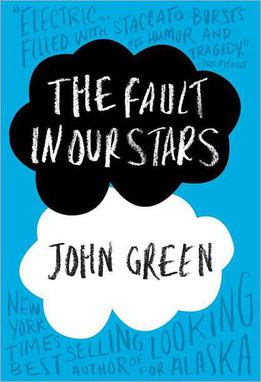 Posted by Gretchen at 5:33 PM No comments:

Love enables us to walk bravely, to run confidently, and to live triumphantly. -Amish proverb
Posted by Gretchen at 5:23 PM No comments:

"The Mighty One, God, the Lord,
speaks and summons the earth
from the rising of the sun to where it set." -Psalm 50:1
Posted by Gretchen at 10:06 PM No comments:

Gretchen
I'm a high school English teacher who lives with my wonderful husband, two cats, and a dog. I spend my time reading, knitting, and attempting to stay devoted to something long enough to accomplish anything.